The Welsh Rugby Union has teamed up with the Calon Hearts charity to ensure life-saving defibrillators will be installed at every club in Wales, free of charge this season.
With more than 300 clubs throughout the country hosting rugby from senior men and women at clubs and hubs to a wide range of junior teams every weekend, the offer will be of benefit to thousands.
“This initiative will provide vital help and support throughout our game as it seeks to return safely after the disruption of the pandemic,” said WRU community director Geraint John.
“Defibrillators have been a major topic of conversation with clubs and also at the Community Board Level in recent weeks and I would like to thank everyone involved in getting this project over the line.
“This is a significant financial commitment from our Board, but it is one that will save lives and have a directly positive impact not just on the community game in Wales but on the health of the nation.
“We know there are clubs who already have defibrillators but there are many areas where they haven’t been purchased through lack of funds or availability and we have now removed this obstacle.
“For those clubs who are already ahead on this issue, and have their own machines, we will still be in a position to provide additional support, whether that be extra machines for training grounds or club houses, introducing mobile machines or meeting the cost of those already purchased.” 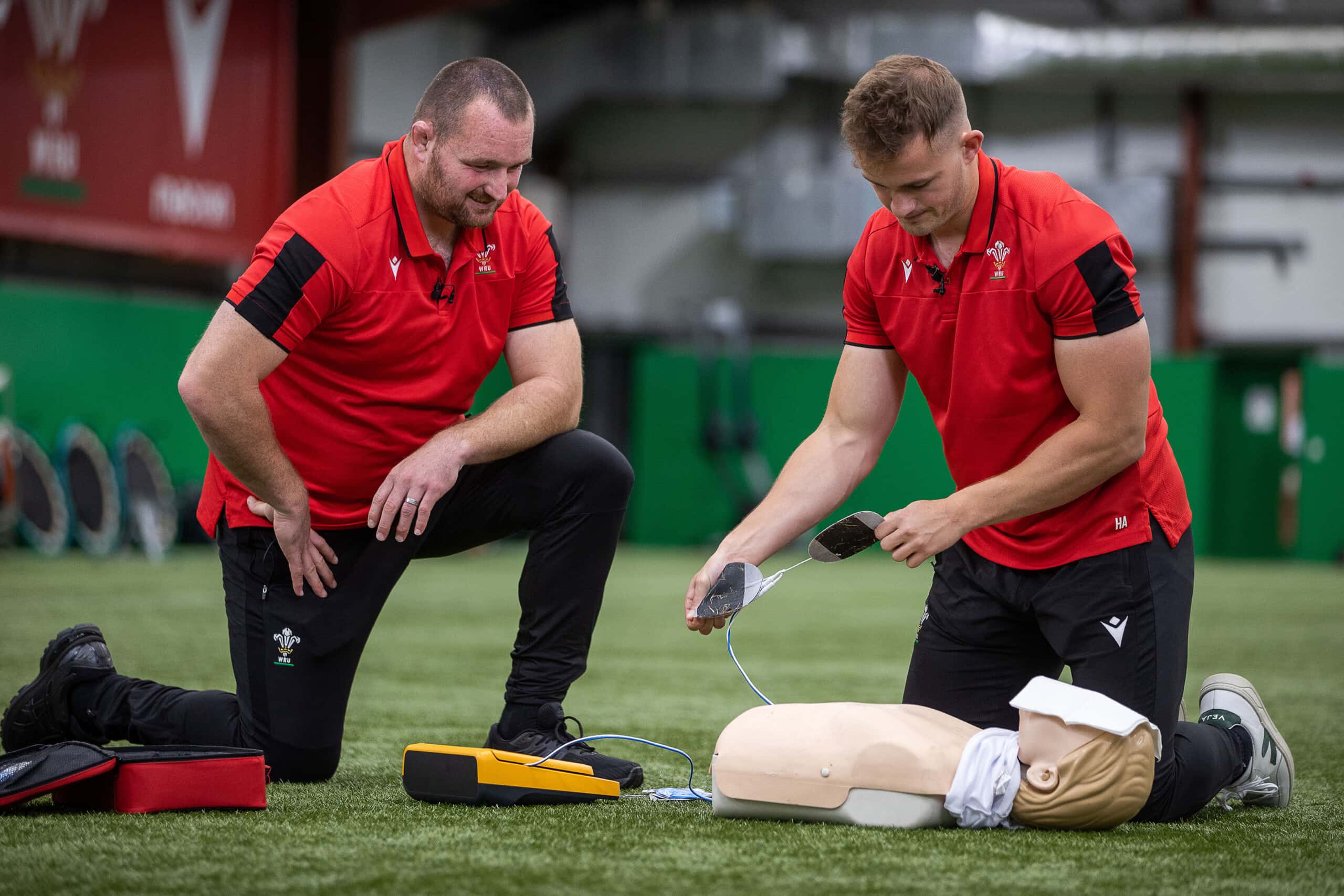 Ken Owens and Hallam Amos practice with a defibrillator.

Calon Hearts will provide the defibrillator, manage its installation and provide training to relevant volunteers at clubs on use and maintenance of the equipment.
‘Shocking’ statistics state that the survival rate after a sudden Cardiac arrest outside of hospital is only 3%. Whereas when a Defibrillator is used, the survival rate is 47%.
“There are not enough defibrillators in Wales or trained people to give victims the best chance of survival during those first few critical minutes and so we are extremely grateful to the WRU for their support of this initiative,” said Calon Hearts Defibrillators and Screening Wales director Sharon Owen.
“We hope the defibrillators never have to be used, but if they are used many lives in Wales will be saved as a consequence. When someone suffers a cardiac arrest, their chances of survival drop by up to 14% for every minute that passes, so a speedy response is crucial. Early defibrillation – within four to five minutes – gives the best possible chance of survival.
“With access to more defibrillators at rugby clubs throughout the country, Calon Hearts can help our partners in the emergency services to improve chances of survival and protect our communities.”
Someone in cardiac arrest will lose consciousness, will not be breathing and will have no signs of circulation. A defibrillator is used to shock the heart following a cardiac arrest.
In Wales there are approximately 8,000 sudden cardiac arrests, outside of those in hospitals, each year.
“This is a fantastic initiative and one that the WRU Board has been only too happy to support,” said WRU chairman Rob Butcher.
“Rugby is the heart and soul of Wales and our clubs are at the centre of communities throughout the country, sometimes in remote places but always in areas where there are groups or large gatherings of people.
“If only one life is saved by this venture that will be a huge bonus for us, but just to have the reassurance that these life-saving machines will now be at every rugby club in Wales is enough.” 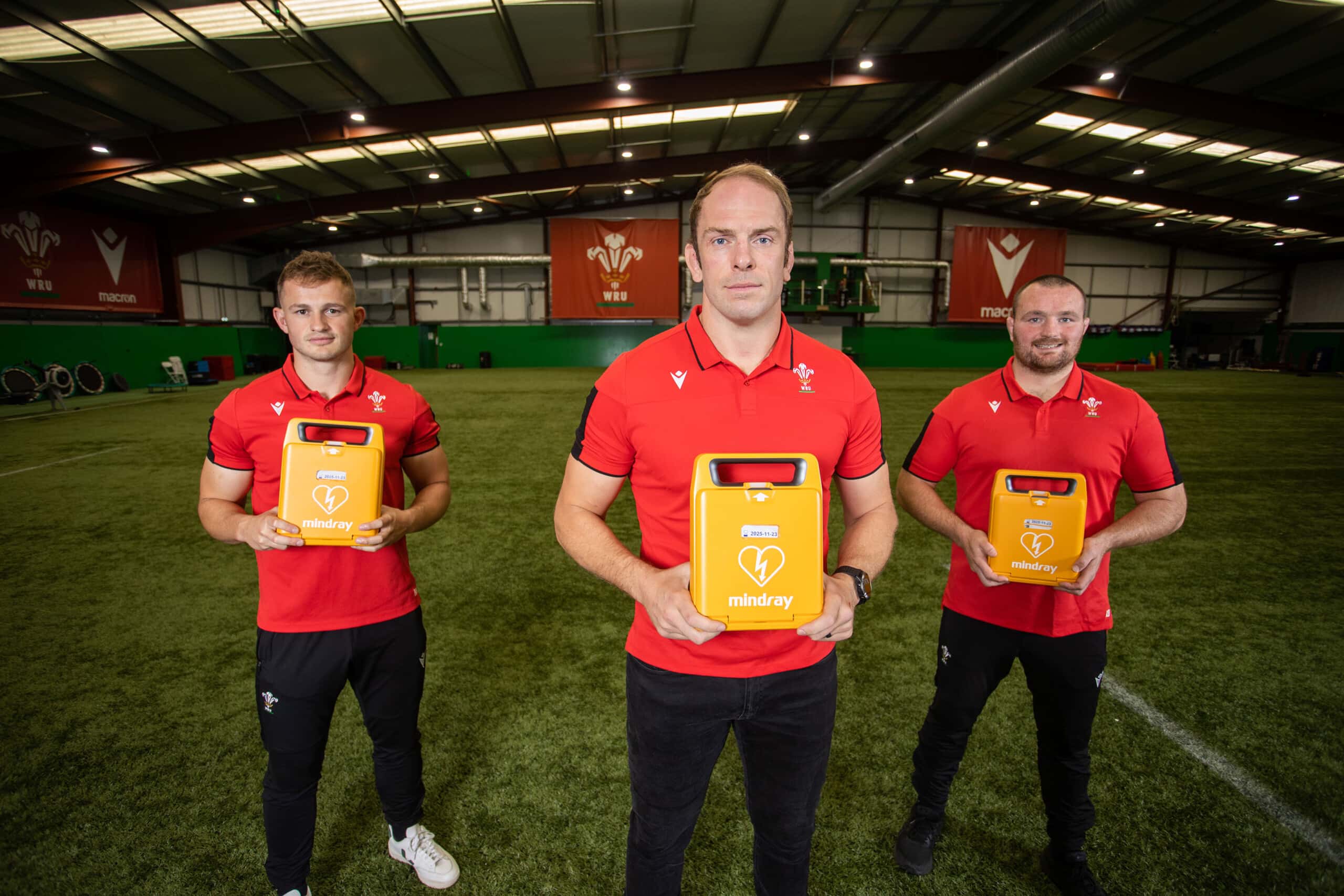 The WRU has had a long association with the Calon Hearts charity, helping with fundraising and raising awareness since 2013, but this new proactive approach to installing defibrillators free of charge will make a huge impact.
All clubs need to do is reply to an email from the WRU community department to club secretaries, or make contact directly, and a brand new defib unit – worth up to £1,200 if bought directly – will be issued.
Clubs who already possess devices purchased since 1st June 2021 will also be eligible for a refund on payments made, upon proof of purchase.
“This is a fantastic initiative from the WRU and Calon Hearts,” added Wales and Scarlets hooker Ken Owens, who was joined this week by fellow internationals Alun Wyn Jones and Hallam Amos to help raise awareness of the availability of defibrillators to clubs.
“We all know that cardiac arrests can strike at any time and there are plenty of examples of people suffering them at unexpecting times and places in the sporting world.
“I’m sure clubs throughout Wales will want to get involved. We all hope the machines will go unused, but it will be hugely comforting for everyone in Wales to know that they are there, at a rugby club near you, if needed.”
The Calon Hearts charity raises funds across Wales in rural communities, work places and schools with the aim of ensuring defibrillators are as commonplace as fire extinguisher in Wales and this new partnership with the WRU is a huge step in the right direction for their work. 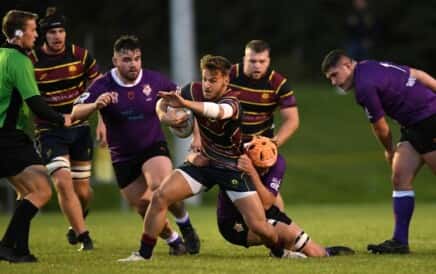 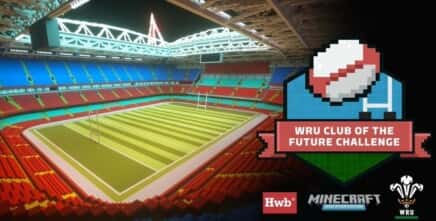 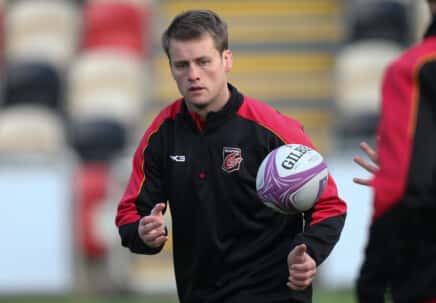